Have you ever purchased the DVD of a “restored” movie and then puzzled over the terms used to explain the restoration? For example, the text below was taken from the DVD of “Rebecca”, and is typical of descriptions found with DVDs of restored movies:

If the terms used in that description make you sit back and scratch your head, I think a more detailed explanation might prove to be helpful. Below, I’ve reviewed the technical terms commonly used to describe the film elements that are utilized for a movie’s restoration. 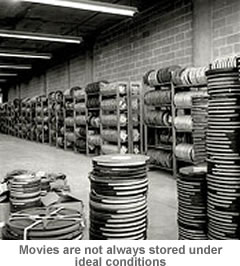 When restoring a movie, the first challenge is to find a copy of the movie that is as clean, sharp and clear as possible. Although the movie’s original negative is the ideal source from which to begin the restoration, these are often either not available or in such poor condition as to be unusable. The reason for this is that commercial movies were shot on nitrate film before the early 1950s, and this film stock is highly flammable and often decomposes quickly if not stored properly. Another reason is that early film negatives were often discarded by production companies after the movie had gone through the distribution cycle, since it was felt there was no longer a market for them. The acetate “safety film” used from the early 1950s until recently has also been found to be unstable, and it has a tendency to fade rather rapidly.

So what are the various generations a film’s image goes through as it moves further and further from the original camera negative? Understanding the following terms will make it easier to appreciate the film restoration process, and why some restorations are better than others. As a rule of thumb, the more generations the chosen film source is from the camera negative, the grainier the image on that film source will appear. This grain causes the film’s image to lose sharpness and clarity (referred to by technicians as: “contrast”, “gradation”, “resolution”, and “acutance”).

This is the film that actually goes through the camera and records the original visual image. (It is occasionally called the “picture negative”.) The film that is used in the camera creates a negative image (blacks and whites are reversed, and colors are registered as compliments of their true colors, i.e., reds appear as a shade of green, blues appear as orange, etc.) This negative is used to produce a positive print, also called an “interpositive”, where the original blacks and whites are once again black and white, and where colors are shown accurately. In the production of commercial movies, the camera negative is not used to record sound.

This is a film that captures only the sound. It is separate from the “picture negative”, and is combined with the visual film image only in the final printing process.

The first positive print made from the camera negative. This is often referred to as a “first-generation print”, or a “master positive”, and it is used to make dupe (duplicate) negatives.

Sometimes called a “fine-grain sub-master”, or “protection print”, or “lavender print”, or “purple print” (because the fine-grains of the film have a slightly purple color to them). These are positive prints, made from either camera negatives or dupe (duplicate) negatives, using film that has a low contrast, extremely fine-grained emulsion. They are made expressly and exclusively for the purpose of making another dupe negative, and are not meant to be shown. (In fact, the projected image quality of these prints is poor compared to a timed projection print, and the perforations have a slightly different shape than projection prints.)

This is a fine-grain master that combines, on one strip of positive film, the images from both the picture negative and the sound track negative.

Note: During the silent era, a film company would usually produce two camera negatives, placing two cameras next to each other to shoot a scene. One negative was usually used for domestic prints, and the second, often inferior negative (since the camera position was not perfect), used for foreign prints. When this was done, an internegative, a “printing negative”, was not used.

The first timed, color-corrected, trial print made from the conformed, original negative. Although this edited print may or may not include the optical sound track, it does include the finished fades, dissolves and superimpositions of the final movie. This print is usually not released for general viewing.

Sometimes called “projection prints” or “serial prints”, these are the finished prints made from the final, edited internegative (the “dupe” negative) for actual distribution. Because of damage resulting from normal wear and tear, and due to scenes being deleted or altered because of censorship, no two release prints are alike. If a release print is deemed unique (e.g. the best surviving example of a film), or only one of a handful of known surviving prints, it may be classified as a “preservation master”. A “preservation master” is used to create a new dupe negative from which new prints can be produced. (Although some nitrate release prints are clear and sharp, restorations that begin with only a print made from a “preservation master” that may be two or three generations removed from the original camera negative, sometimes produce a rather low quality restoration even when scratches and other artifacts are removed.)

If a movie is going to be “restored”, the negative of the movie, or the best print available, is reconstructed and each frame is scanned and converted into a high–definition digital image that can be viewed on a computer. Using mathematical algorithms and other software, while comparing each frame with the frames on either side of it, tears, splotches, scratches, dust motes, and other unwanted visual defects are digitally removed from each frame. After this is done, the brightness, contrast, and color (if necessary) of each frame is digitally adjusted. Once each frame of the movie has been corrected and restored, the entire film is then transferred from the computer to either a master DVD, a high–definition videotape, or rephotographed back onto a reel of film. (If you see a reference to the “MTI Digital Restoration System”, it means that the restoration was done using equipment and software created by Mathematical Technologies, Inc., in Providence, RI.)

So, lets re-read the restoration description from the beginning of this article:

I hope that having reviewed the definitions above, you now find it easier to make sense of this restoration description.

DVDs:
(The following DVDs have restoration descriptions either on the DVD itself, or in the liner notes)