Every now and then a seemingly small discovery changes an entire industry. So it was with the “Latham Loop”, the small, slack-forming loop that the film’s path takes just before it passes in back of a camera’s, or in front of a projector’s shutter. [see the illustration below] 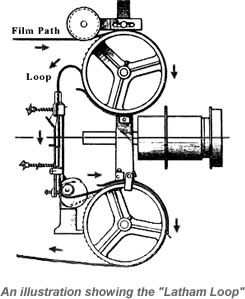 David Samuelson, in an article listing the most significant advances in the art of cinematography, “American Cinematographer” (March, 1999), ranks the “Latham Loop” as one of the most influential technical developments of the 20th Century, and writes that, “For the filmmakers of the time, it was as big a breakthrough as anything that has happened since.”

Why is it called a “Latham” loop?
How was it discovered?
Why was it such a breakthrough?

Well, the answers to these questions are rather interesting, and it all seems to have started with two young bons vivants who wanted to finance their wild lifestyle by filming a boxing match.

According to Terry Ramsaye, in his 1926 history of motion pictures “A Million and One Nights”, Woodville Latham and his two young, handsome sons, Otway and Grey, moved to New York City after the two boys had gone through the assets of their pharmaceutical business in Nashville, TN. While Professor Latham pursued his studies of the sciences (his expertise being in the fields of chemistry and physics) his sons worked for pharmaceutical companies in the city and pursued their passion for wine, women and song.

One day Otway and Grey crossed paths with one of their old classmates from the University of West Virginia, Enoch Rector, who had completed his education in engineering and was preparing to start his career. With youthful enthusiasm Otway and Grey volunteered to show Enoch the town. Their tour brought them to the new Kinetoscope parlor on Broadway that had just opened on April 14, 1894, and was all the rage. For twenty-five cents they could see ten different 20-second “living pictures” on ten different “peephole” Kinetoscope machines that were lined up in the large room. “There, that’s a business to get into,” Grey Latham is said to have proclaimed when they emerged from the Kinetoscope parlor, “I’ll tell you what. Everybody’s crazy about prize fights, and all we have to do is to get Edison to photograph a fight for this machine and we can take it out and make a fortune on it.”

(Note: When Thomas Edison started producing motion pictures, he did not originally have them projected on a screen. Instead, he constructed a tall box in which the film was run in a long loop. The viewer leaned over this box and looked into it through a “peephole”. Edison called this box a Kinetoscope -” kineto” is Greek for “movement”, and “scopos” is Greek for “to watch” – and Kinetoscope parlors quickly began to appear in all of the major cities. In fact, from April 1894 through February 1895, Edison had Kinetoscope sales of almost $150,000.)

With the enthusiasm and daring of youth, the three young men quickly established The Kinetoscope Exhibition Company and recruited two popular boxers, Michael Leonard, “the Beau Brummel of the prize ring”, and Jack Cushing, a likely contender for the lightweight title, to fight the match. Enoch Rector would run the company, they decided, while Grey and Otway continued working to bring in income. They eventually got financial backing from the owner of the drug company that employed Otway.

To make the whole enterprise possible, Enoch worked with the Edison Manufacturing Company to extend the length of film the Kinetoscope could handle from 50 feet to 150 feet, and reduced the number of frames shown per second so that each machine would be able to show a full minute of the match. The filmed rounds themselves were reduced to a minute each, so that each “large-capacity” Kinetoscope could now show one complete round. Then, on Friday, June 15, 1894, the boxing match was filmed at Edison’s “Black Maria” studio, and by the end of the summer the Kinetoscope Exhibition Company was showing “The Leonard-Cushing Fight” in downtown New York City to large crowds that lined up into the street and sometimes had to be controlled by the police.

According to Charles Musser in his book “The Emergence of Cinema”, Grey and Otway later recalled, “We were unable to accommodate the crowds we had, as only one at a time could view the pictures exhibited by the Kinetoscope, and my father suggested making a machine that would enlarge pictures of this character so that more than one could view them at the same time.” In other words, they needed to be able to project the fight onto a large screen so that a whole roomful of people could watch the film, rather than just one person at a time. This would allow them to move the crowds through their Kinetoscope parlor quicker which, in turn, would allow them to sell more tickets.

While Edison was convinced that moving pictures would be merely a passing novelty, and had decided to ignore projection to make a quick profit from his Kinetoscopes, the Lathams felt that there was big money to be made with a projected moving image. Fortuitously, W.K.L. Dickson, Edison’s assistant who was primarily responsible for developing the first motion picture camera, had become dissatisfied with his situation at the Edison Laboratory and agreed to secretly help the Lathams with their project. He also introduced them to Eugène Lauste, a Frenchman who had worked for Edison for six years until 1892. Lauste agreed to become their chief mechanic, and the Lathams established a new company, the “Lambda Company”, specifically for this endeavor (“Lambda” after the Greek letter for “L”).

The first problem was an especially tough nut to crack, because the cameras at this time (Edison ‘s Kinetographs), tended to tear the perforations of the film if the film was more than 100 feet long. This was due to the fact that the spool that fed the film to the camera, and the spool that took up the film, were in constant motion, while the film at the camera’s film gate had to pause for a fraction of a second so that the shutter could expose each frame to a light source. This pause produced an intermittent, jerky movement that put a great deal of strain on the film, and the longer the film the greater the strain.

After a great deal of experimentation, Dickson, Lauste, and Woodville Latham finally hit upon the idea of adding a loop of film to the film’s path that could absorb the effects of the intermittent movement by expanding and contracting. This loop was placed in the film just before it reached the camera’s gate, thereby allowing the film to be rapidly paused and advanced without pulling directly on the rest of the film on the spool. With this seemingly simple discovery, the amount of film that could be shot at one time suddenly was limited only by the amount of available film and the size of the film magazine, and in early May, 1895, the Lambda Company filmed an entire eight minute fight without stopping their camera once.

The chief limitation of motion pictures had suddenly and dramatically disappeared, and what had been, up to that time, a mere novelty could now evolve into a medium with unlimited possibilities. As the New York World rather chillingly prophesied in May, 1895:

Life size presentations they are and will be, and you won’t have to squint into a little hole to see them. You’ll sit comfortably and see fighters hammering each other, circuses, suicides, hangings, electrocutions, shipwrecks, scenes on the exchanges, street scenes, horse-races, football games, almost anything. You’ll see people and things as they are.

On June 1st, 1895, Woodville Latham applied for a patent for a “Projecting-Kinetoscope”. In the application he describes his device as having, “feeding mechanisms located between the devices for supporting the film and separate and distinct therefrom, one of said feeding mechanisms being constructed to uniformly feed the film and produce a predetermined supply of slack.”

The “Latham Loop” had been officially registered, and it is a discovery that continues to be used in every motion picture film camera and projector to this day.

Although we can only speculate, it seems quite possible that if this discovery had never been made, filmed motion pictures might now be remembered, along with the Zoetrope and the Zoopraxiscope, as merely an amusing Victorian curiosity.

© 2004 The Picture Showman. All Rights Reserved.

link to Who Was the First Actor to be Paid $1 Million for a Single Film?

Million Dollar Actress Elizabeth Taylor in Cleopatra (1963) Salaries of Silent Film Actors Half the profits from her filmsA $10,000 per week minimum$300,000 single payment...

Continue Reading
link to When Was Color First Used in Motion Pictures and How Were They Made?

Color motion pictures appeared almost from the very beginning. Thomas Edison experimented with a hand-tinting process in his films.