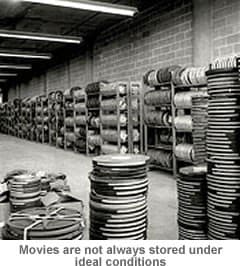 During the silent era, a film company would usually produce two camera negatives, placing two cameras next to each other to shoot a scene. One negative was usually used for domestic prints, and the second, often inferior negative (since the camera position was not perfect), used for foreign prints. When this was done, an internegative, a “printing negative”, was not used.