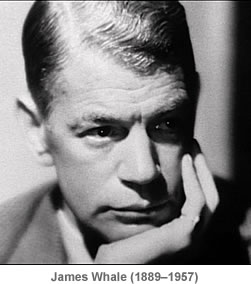 Although James Whale directed over 20 movies from 1930 to 1941 in a number of different genres including the musical “Show Boat”, he is best known for directing the four stylish gothic/horror films “Frankenstein” (1931), “The Old Dark House” (1932), “The Invisible Man” (1933), and “The Bride of Frankenstein” (1935). His films were notable for their fluid camera movement, leisurely pace, unexpected and idiosyncratic humor, emphasis on detail, and discriminating restraint. “The Bride of Frankenstein” is considered to be, by many critics, among the greatest horror films ever made.

“Journey’s End”, (1930), a film adaptation of the play Whale had directed in both London and New York. George Gorbard of the “New York World” newspaper reported, “A seemingly stunned audience remained seated and inarticulate for a full minute after the picture had been completed and the lights had been turned up. It is undoubtedly the greatest picture of the year.” A nationwide poll of over 300 journalists named James Whale one of the ten best directors of 1929-1930.

“The Bride of Frankenstein”, (1935). Starring Boris Karloff, Elsa Lanchester, Colin Clive and Ernest Thesiger, this film was also budgeted at just under $300,000 but ended up costing almost $400,000. The movie was shot at Universal Studios in 46 days. The musical score, written by Franz Waxman and recorded in one marathon nine-hour session, is considered by many to be the greatest score ever written for a horror movie. Variety praised the movie as, “one of those rare instances where none can review it, or talk about it, without mentioning the cameraman, art director, and score composer in the same breath as the actors and director.”

“Show Boat”, (1936). Starring Irene Dunne, Allan Jones, Helen Morgan and Paul Robeson, with music and lyrics by Jerome Kern and Oscar Hammerstein, II, (who also wrote the screenplay), the budget for this film was set at over $900,000. Just after the final shots of “Show Boat” were completed, Universal Studios was sold by its founder, Carl Laemmle. With the sale, the head of the studio and James Whale’s mentor, Carl Laemmle, Jr., resigned and would never produce a James Whale film again. “Show Boat” would be the last film over which James Whale had complete control. It was a huge success.

“The Road Back”, (1937). Costing almost $1 million, the script for this movie was adapted from a powerful novel by Erich Maria Remarque (who also wrote “All Quiet on the Western Front”). After James Whale completed the film it was reedited a number of times by Universal Studios to please the German government. Whale refused to look at the film in its final, mutilated state. The negative and prints of Whale’s version no longer exist.

“Sinners in Paradise”, (1938, a.k.a. “Secrets of a Sinner”). When James Whale wouldn’t allow Universal to buy out his contract, the new head of Universal Studios assigned this project to Whale which was designed to humiliate him. Whale was given a minuscule, “B” movie budget, and the script and casting were handled by the movie’s producer, Ken Goldsmith. When released, the movie drew the most unrelentingly negative reviews of Whale’s career.

James Whale grew up in an English working class family with three sisters and a brother. His father was a blast furnace man in a steel mill for most of his life, and his mother was the daughter of a coal miner.

While in his teens, Whale worked in a cobbler’s shop and, later, in a sheet metal factory where he pounded ornamental designs into buggy fenders. After saving whatever money he could, he attended the Dudley School of Arts and Crafts for almost four years until the outbreak of World War I. It was at this school that he cultivated and refined his artistic talents, and he continued to draw and paint for the rest of his life. He once explained that, “I was a painter before I became an actor, an actor before I became a director.”

After enlisting in the army, and becoming a second lieutenant, Whale fought in a number of battles in France before being captured by the Germans and becoming a prisoner of war. He was kept at the Holzminden prison camp in Brunswick, Germany, for 15 months. It was here that James Whale, “found himself devoting his time to the production of plays, for which he could design and paint scenery, act, and participate in the writing of original material.” The plays were very popular, and Whale found the enthusiasm of the audience intoxicating.

Soon after returning to England after the war, Whale joined the Birmingham Repertory Company and began his career in the Theatre. While performing at the Gaiety Theatre in Manchester he met Ernest Thesiger, an actor he later cast in two of his most memorable films. Whale patterned his regal bearing and royalist attitudes on those of Thesiger, and also worked to diminish his regional accent as Thesiger had done.

In 1928, Whale directed and designed the set for a play about World War I entitled “Journey’s End”. Initially starring a 21-year-old Laurence Olivier, and later Colin Clive (who would eventually be cast in the title role of James Whale’s film “Frankenstein”), the play was so successful that eventually every train and bus in and around London carried advertising that read, “ALL ROADS LEAD TO JOURNEY’S END”. Whale went on to direct both the New York production of the play, and then the Hollywood movie version. As director of the movie version, he was paid $20,000 for 15 weeks’ work plus $1,333 for each additional week.

James Whale was always astonished that Hollywood would pay such huge salaries. “That they should pay such fabulous salaries is beyond ordinary reasoning!” he said. “Who’s worth it? But why not take it?”

Whale was, “forced more or less against my will,” to direct the movie “Frankenstein”. He said that, “At first I thought it was a gag.” Although Bela Lugosi had been considered for the part of the Frankenstein monster, Whale decided that he wanted someone who was more likeable, and that Lugosi looked inappropriate for the part with his round, fleshy face. The rumor that Lugosi turned down the part because the character didn’t have any lines does not appear to be true. When someone suggested Boris Karloff for the part of the monster, Whale is said to have asked, “Boris – who?”

After “The Invisible Man” achieved financial and critical success, people at the studio began referring to Whale as “The Monster Man”, a moniker he detested.

Although the sequel to “Frankenstein” was tentatively called “The Return of Frankenstein” before it began shooting, James Whale preferred the title “The Bride of Frankenstein” even though advertisements for the movie clearly indicated the “bride” was created for the Frankenstein Monster and not for Dr. Frankenstein. Whale cast Elsa Lanchester, the wife of Charles Laughton, to play both Mary Shelley and the “bride” of the Monster.

In 1942 James Whale directed a movie for the War Department entitled “Personnel Placement in the Army”. This is Whale’s least known film, and it is the only one that is apparently lost.

While he was working as a film director, James Whale invested his money wisely. When he retired from the film industry he settled down in genteel comfort in a pleasant area of Los Angeles where he partied, painted and occasionally agreed to direct a play.

Throughout his life, James Whale neither hid nor flaunted his homosexuality. Although he may have occasionally placed a subtle reference to his sexual orientation in a film, it was never at the expense of the film’s overall artistic integrity.

Although James Whale was English, and used many English actors in his films, he never directed a film in England.

After becoming increasingly debilitated following several strokes, James Whale committed suicide by drowning himself in his swimming pool. In his final note he wrote, in part, “The future is just old age and illness and pain. Goodbye all and thank you for all your love. I must have peace and this is the only way.” All his life, Whale had had a morbid fear of the water.

In 1995 the novel “Father of Frankenstein”, by Christopher Bram, was published. This fictional account of the final months in James Whale’s life uses flashbacks and other techniques to review the life of this complex man.

link to Greatest Movies of the Silent Film Era

The Silent Film Era ran from 1895 to 1929. The period is marked by stories without synchronized dialogue or sound.

Continue Reading
link to When Did "Movie" Replace "Motion Picture"?

In America the slang expression “movie” began to get circulation in newspaper comic strips in 1909, and within a year it was well on its way to nationwide usage.